A posted picture of a closed McDonald's outlet has taken the internet by storm. The pictured not only shows the closed window but a note from the employee.

The photo immediately went viral after posting it on Twitter, it has sparked a new debate about the realities of low-wage work and staffing problems at fast-food businesses.

A McDonald's employee decided that they'd had enough, and quit in a dramatic fashion.

After mounting frustration became too much to bear, the McDonald's employee decided to quit in the middle of their shift. The story is truly incredible, but the outcome seems to have the internet divided.

Frustrated and fed up, they decided to close the restaurant down early and walk off the job.

Before the employee left, they affixed a sign to the drive-thru speaker that read, "We are closed because I am quitting and I hate this job." 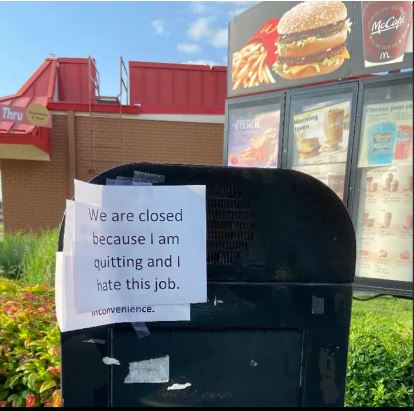 Within days his post had earned more than 200,000 likes and thousands of retweets. In a follow-up tweet, he claimed he felt compelled to learn the backstory, and even went to speak with an employee who confirmed the manager’s abrupt departure.

“I spoke with the staff at this McDonald’s today. It turns out the sign was put there by a night shift manager who suddenly quit, and it was left up overnight,” he wrote.

A representative for McDonald’s has not responded to a request for comment, but GreatApeDad claims this particular Louisville location has had its share of difficulties in the previous weeks.

While many of the comments appeared to be in support of the unnamed worker, with several people commenting about their own experiences working for fast-food chains.

“That was a mood for just about everyone I worked with when I was at McDonald’s,’ wrote one user.

While another added, “It's annoying when this happens, but totally worth it for the sake of the workers," added a second user.

Yet another user quipped, “Thus begins the next great cycle of automation. I give it three years tops before we start having McDonald's being able to operate without any employees at all."

Historically low-wage employers like McDonald’s have been struggling to find employees in the wake of the pandemic. Many people are still out of work and are reluctant to return to jobs that pay low wages. Some employers have raged their minimum wages in response to the labor shortage, while others continue to search for workers in a time when workers are hesitant to return to the office or store.

In response, McDonald’s announced a wage increase. Entry-level employees will now make between $11 to $17 per hour while shift managers take home $15 to $20 per hour, depending on the location.