Although we have come a long way in medicine and can now know much about our children before they’re even born, nature always continues to surprise us.

While pregnancy is a beautiful thing, many people are overwhelmed and scared when they get the news. Not everyone is ready to raise a child, but there is no stopping mother nature.

However, there are also couples who are more than ready to have a child. In fact, many couples are praying to see a positive result on a pregnancy test. No matter the marital status of the people involved, there are plenty of positive scenarios for welcoming a child into the world.

Second-time parents Todd and Nicola Bailey were thrilled when they discovered they were expecting twins. Their firstborn child, Lucas, would have two younger siblings. When Nicola gave birth to twin daughters, everything went well, and the babies were born healthy.

Quinn was born first, and Harper entered the world around forty minutes after her sister.

Previously, the doctors said their apology to the parents for not having discovered the disorder in Harper. However, Nicola, along with her husband, Todd, told the hospital officials that there was no need for an apology and they did not see it as a negative.

“All I really remember is the doctor saying ‘I’m sorry’,” Nicola told the source. “But as soon as I saw them both my heart just melted. They were both so beautiful.”

Usually, doctors try to detect the condition before a baby is born, but some go unnoticed until birth. However, the Baileys were delighted in both of their daughters.

The news did surprise Nicola and Todd but they loved their twins and wouldn’t change either of them “for the world,” Nicola said. Now, the family wants to "take down the stigma surrounding those with Down Syndrome." 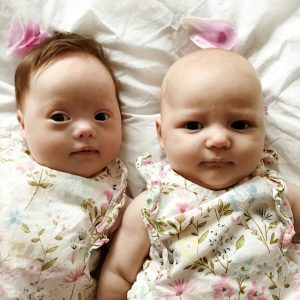 Nurse Nicola, then 32, from Sheffield, South Yorkshire, is on a mission to educate people about the genetic condition and reduce the stigma.

“Harper is Harper and Quinn is Quinn—they are not the same so I try not to compare them, however hard that may be.”

“I don’t see Harper as any different to my other children and would not change her for the world. You do see people staring at her and it’s hard at times as the perception of Down’s syndrome can be so negative.”

Around 40,000 people in the United Kingdom have Down syndrome, and experts say the chance of having one twin with the condition is one in a million.