He Dumped 80,000 Pennies On The Lawn To Pay His Child Support, What The Kid Did Is Absolutely Amazing…

The child support arrangement was something that people typically fought over after divorce, but billions of dollars in unpaid payments go out every year, and the children are the ones who suffer.

When an estranged father had to pay the final child support to his daughter, he decided to be anything but gracious. He chose to pay the $800 he owed as pennies that he dumped on the front yard of her Virginia home where she lives with her mom.

There were a total of 80,000 pennies that he emptied into the yard using a rented trailer. Now, the 18-year-old Avery Sanford is trying to turn the situation around from a clearly negative experience to one that will have a positive impact by donating money to those in need.

Avery was in the middle of an online class when her father showed up with a landscaping trailer and begun dumping the coins onto the property.

"I just turned 18. When I was in the middle of class, my dad came by. He had rented a trailer," Sanford told WTVR. "He pulled up in front of the house and turned the trailer on so it dumped out all the pennies on the grass, and my mom came out and was like, 'What are you dumping in my yard?' She didn't know who it was until he shouted, 'It's your final child support payment."

This was when Avery did something incredible. Instead of wallowing in grief for her lost relationship with her father, which she has every right to do, the teenage girl decided to do something that would help change the lives of those who desperately need it. Avery and her mother scooped up every penny they could and donated the money to a charity called Safe Harbor, which is a domestic abuse shelter in the area. 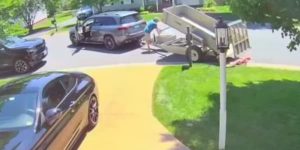 This dad thought that dumping pennies on mom’s lawn would be a statement, but it was actually something very childish and immature. He got himself into more trouble because of this action!

While this dad thought that dumping pennies would be a statement, mom’s court order is still in place until the debt has been paid off. This means that there is no change in child support even though he did something so childish and immature.

The dad in question has not been publicly named, but his teenage daughter is more than happy to speak up about her dad’s childish behavior. Eighteen-year-old Avery Sanford was horrified when her dad dumped tens of thousands of pennies on her mom’s front lawn.

While Avery knows what her dad did was wrong, she wants other people to see how vile the behavior really was. She hopes that the penny example can serve as a reminder of domestic abuse and the parental manipulation that often goes on during custody battles and throughout the divorce process.

Cathy Easter, executive director of Safe Harbor, agreed that donating the money was indeed making the best of the situation. She told The Washington Post, "They were able to turn such a negative experience, and what her daughter witnessed, into a positive. They found a way to turn this around and not feel devastated about it."

Since the story broke, the shelter has experienced a spike in donations and has received nearly $5,000 so far. Many people have cited the family and their story as the reason they decided to make the donation.