Their Elderly Neighbor Died, And Then They Found Out He Had Things Intended For Their Daughter….

It goes without saying that Christmas is the ideal time of year to show our neighbors, relatives, and friends how much we care by giving them small gifts. Even though Christmas is regarded as the season of giving.

Now, an elderly man passed away with an unexpected bag of stuff discovered in his home. And all of those belonged to the 2-year-old little girl next door as they soon realized. And when it was given to her parents, they were shocked to see what their neighbor had done without their knowledge after they opened it and peered inside.

Ken Watson had a firecracker personality at 87 years old. The people surrounding Ken were profoundly affected by him. Ken, a former deep sea diver, continued to enjoy stunts well into his senior years. He picked up skydiving at the age of 85 and even tried dangerous stunts while attached to an airplane's wings. The greatest prank he ever performed wasn't discovered until after he was gone, despite the fact that his pranks gave those around him something to talk about. 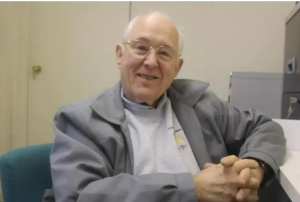 Ken resided close to Owen and Caroline Wilson and their two-year-old daughter Cadi during his final years. Ken, who Owen called a "real character," adored their precious baby girl from the time she was born. The elderly guy showered Cadi with affection as a grandpa would, building a strong relationship and friendship with the child because he didn't have any grandkids of his own. 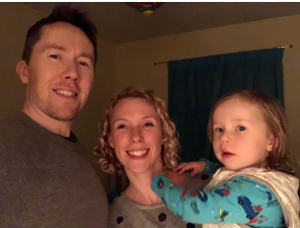 Owen recalled the time they moved, “We moved to the street three years ago and made a real point of going round and meeting all the neighbors,” he said.

Adding that the first impression perfectly summed up Ken, who did an airplane wing walk at 85. “Ken wasn’t in when we first called round, but the next day we heard some banging. I went out to investigate and there was Ken in navy overalls bouncing across the face of his house at the top of a 20ft ladder. He was 83 at the time.”

Not only that, the entire Wilson family, including their dog, seemed to appreciate the elderly. "On that first meeting, he gave our dog a chocolate biscuit. She absolutely loved him from that moment on,” Owen said.

“Really loved him passionately. She would shriek when she saw him, he’d call her ‘my darling’ and ‘sweetheart.'”

However, tragic news came, the loving elderly man has passed away. The neighborhood felt empty this year after the senior passed away. His family came together after the incident to assist clean and tidying his home. Owen Williams then heard a knock on the door on December 16, 2019.

When he opened the door, he saw Watson’s daughter standing there with a plastic bag. What was inside, however, would instantly melt his heart.

Williams thinks that she needed help with her garbage. Hence, Williams and his wife were more than surprised to find 14 presents wrapped in Christmas covers.

As it turned out, the old man, grew attached to the little girl that he made sure she would always get a present from him every Christmas- even after death.

The elderly man's considerate and generous act touched his daughter, Cadi's parents, and everyone else who heard about his beautiful gifts. Even before the presents were opened, tears started to flow.

“She said ‘these are presents for Cadi for the next few Christmases — it’s quite heavy’. She was quite emotional and I got a lump on my throat,” Owen shared.

When she found out how much their late neighbor loved Cadi, even William's wife was unable to hold back her emotions. “It was like a Mary Poppins’ bag, the presents kept coming. It’s an actually unbelievable Christmas story.” Owen said.

“My wife and I think it might make a nice Christmas tradition to give our daughter ‘a present from Ken’ for the next 14 years,” Owen added.

And the only way to ensure she received the appropriate gift at the appropriate moment in her life, he continued, was to open them straight away because a gift for a toddler would be very different from one for a teen.

After opening the plastic bag, Williams shared the story on Twitter, writing:

“Our elderly neighbor passed away recently. His daughter popped round a few moments ago clutching a large plastic sack.”

“In the sack were all the Christmas presents he’d bought for ‘our’ daughter for the next thirteen years.” 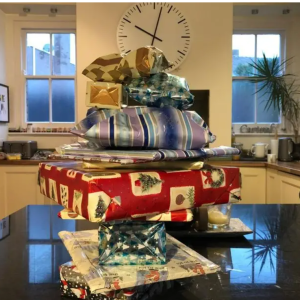 However, the couple confessed that they were not able to contain their curiosity and already opened one of the 14 presents. In addition to three or four soft toys and a book, Owen claimed he could tell there were more books in the other presents. A stuffed goat was the second thing Cadi unwrapped.

Ken was a generous person who knew how to enjoy life to the fullest. He has worked as a baker, carpenter, engineer, and salvage marine diver in the past. However, knowing how to make others happy beyond all else, as evidenced by the considerate gifts he gave Cadi.

Even though Ken passed away, the people he loved and the countless others who heard about his story will always hold his memories and the life he led dear to their hearts.