She Had To Put Her Baby Up For Adoption Decades Ago, Then She Was Told Her Was Right Behind Her…

Often when teenage mothers have children at a young age, they aren’t ready to take care of them. This results in the baby being given up for adoption.

Approximately 135,000 children are given up for adoption each year, this is a story of how one man found his mother after decades of searching!

Stacey Faix had to make a very difficult decision at the age of 15. The teen found out that she was pregnant. She gave birth to a baby boy and put him up for adoption because she was not ready to take on the responsibility of being a mom yet. Though her life would never be the same again, it moved on.

The baby was adopted and was named Stephen Strawn. From Pittsburgh, Pennsylvania, Stephen went to live with his new family in Ohio. He grew up and went on to serve in the U.S. military.

Stacey believed that she would never get to see her son again, however, this wasn’t the case.

For adopted kids, the idea of reconnecting with their birth parents might be a little overwhelming, leaving them with a myriad of emotions they may never be able to explain.

Stephen felt a strong urge to connect with his biological mother, so he searched for her. However, years went by, and his efforts to find the woman who gave birth to him ended in vain.

Stephen was an Air Force veteran and lived in Pennsylvania with his wife. His birth records were lost in a flood, which gave him trouble locating his biological mom, Stacey Faix. He told ABC:

Fortunately for him, his wife found out that the law in Pennsylvania had been changed, which meant that adoptees could request their original birth documents with the names of their birth parents written on them.

Stacey had no idea that her biological son, Stephen, was working on finding her. Stephen sent his information to an agency and a month later, he received his birth certificate.

The following year, he surprised his mom at the Pittsburgh Half Marathon, where she was running with members of Team Red, White, and Blue, a social organization that supports veterans.

Right before the marathon, Stacey was given a letter that read: “It’s been 13,075 days since you last saw me. I didn’t want to make you wait one more.” 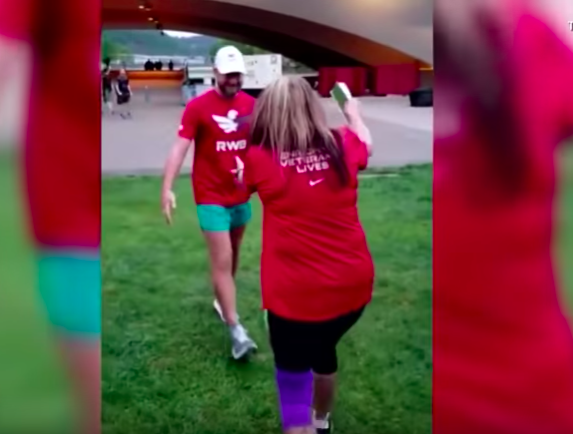 In the tear-jerking clip below, watch the moment Stacey realizes just who is standing right behind her, 35 years later.