They Tried Stealing $18,000 Worth Of Purses, Then Got Hit With Instant Karma…

When a member of the thief thinks he can get away with his crime by quickly running off for the exit, however, it was all caught on video, how the theft ran straight into the most satisfying karma just before he could escape with the $18,000 in luxury purses he has stolen!

Some gangs have become so arrogant that they frequently enter a store, grasp armfuls of merchandise, and make a savage dash for the exit, fleeing with merchandise valued at thousands of dollars before the staff has a chance to react.

The “Smash-and-grab” crimes are plaguing upscale stores in major US cities, with mobs of thieves making off with expensive goods in brazen, nighttime raids, and businesses in high-crime areas have been devastated by smash-and-grab theft.

And police were astounded by how "brazen" the burglars have grown following the theft of merchandise from a designer store in Bellevue, Washington. However, it has also resulted in some brash decisions with their bold behavior --that led to one of the unfortunate suspects being in Jail.

According to the police, a neighborhood theft group planned a systematic heist in which many suspects targeted a Louis Vuitton store in broad daylight. The scheme, which involved many burglars stealing expensive handbags from racks, ripping them from the displays, and running for the exits, was caught on camera. 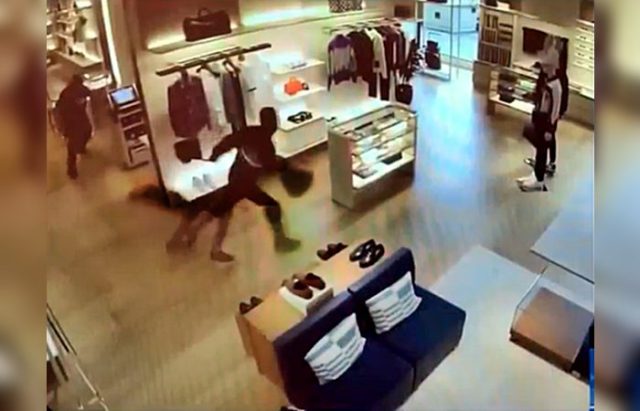 Unluckily, one burglar wasn't as fortunate.

The thief nearly made off with about $18,000 worth of designer items at a Louis Vuitton store but he didn’t get very far, while his friends had successfully made off with multiple luxury purses each.

The 17-year-old didn’t realize just how to clean luxury retailers can keep their stores. After grabbing the goods, the assailant ran straight into the crystal-clear glass door and knocked himself out before he could make his grand escape.

The 17-year-old was already in handcuffs when he woke up. Authorities have not revealed the suspect's identification because he is under the age of 18. Security tape makes it very evident that the young man is a part of the same retail theft ring as Earnetra Turner, a career thief with 24 warrants for failure to appear in court in a single year and many crimes for theft and robbery, as well as Billy Chambers, a man convicted of murder.

Following the crime, Bellevue Police Captain Rob Spingler said, “Brazen is the perfect word for it.”

In an effort to stem the recent surge in theft cases, Bellevue police have been tough on stealing. And they successfully decreased retail theft by 52 percent in 2022 versus 2021, thanks to their hard work.

“This is all data-driven, we use our accountability and transparency dashboard and we follow the crime wherever it goes and we’re going to continue it as long as we need to,” said Bellevue Police Captain Rob Spingler.

Authorities are increasing patrols in specific areas, and prosecutors are having success in court when prosecuting retail theft cases. Captain Spingler said, “The message is, if you come to the City of Bellevue, you commit these crimes, we’re going to put together solid cases.”