Thief Hijacker An Amazon Delivery Truck, And Got Himself Into A Boatload Of Trouble

A Nevada man suspect in a home invasion robbery led officers on a pursuit in a stolen Amazon delivery truck through surface streets and on the 60 Freeway.

Quintin Jarnall Larks, 32, was arrested Monday evening at the end of the wild chase, in which an Amazon delivery van barreled through city streets, drove the wrong way, and hit at least three vehicles on the 60 Freeway.

The crime spree began Monday at about 5:15 p.m when Riverside PD officers responded to reports of two robberies at a mobile home park in Riverside, east of Los Angeles, police said. While officers were responding, they learned this same suspect also just carjacked an Amazon delivery van before fleeing the mobile home park.

Officers were able to locate the stolen delivery truck through GPS tracking. At the same time, the dispatch center received several calls about an Amazon delivery truck that crashed into cars that were parked along Arlington Avenue.

A short time later, officers saw the stolen truck at Arlington and Victoria avenues and tried to stop the suspect. Riverside PD officials said the suspect failed to yield and a pursuit ensued through surface streets toward the 60 Freeway.

He crossed the center median along Martin Luther King Boulevard and struck a vehicle at Canyon Crest Drive just before entering the eastbound 60 Freeway. The suspect continued on the freeway for several minutes when he intentionally collided with three occupied vehicles. 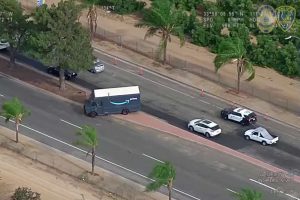 The delivery van became disabled west of Day Street and the suspect ran on foot across the westbound lanes of the freeway in his attempt to evade arrest. He could not climb over the tall barrier wall and pursuing officers safely took him into custody.

Fortunately, there were no serious injuries to any of the victims who were attacked, robbed, and struck by this suspect, although he did cause significant damage to several vehicles while fleeing apprehension.

Captain Chad Milby, who oversees the Field Operations Division, said in a statement:

“This suspect posed a significant threat to our community. The composure and professionalism our officers, field supervisors and dispatchers performed during this intense and chaotic situation not only led to the apprehension of a very dangerous criminal, but demonstrated the high level of training our department goes through to keep Riverside safe.”